The slopes are particularly sunny on the southern side of the Austrian Alps, which is one of the reasons why Carinthia is becoming ever more popular as a winter sport destination. The sun-drenched slopes combined with a helping of southern hospitality and rounded off with Carinthian Alpe-Adria cuisine complete winter stays. The abundance of sunshine can also be seen in the numbers, of course. Carinthia’s ski resorts register around 100 more hours of sun in the winter months than destinations north of the main alpine ridge. 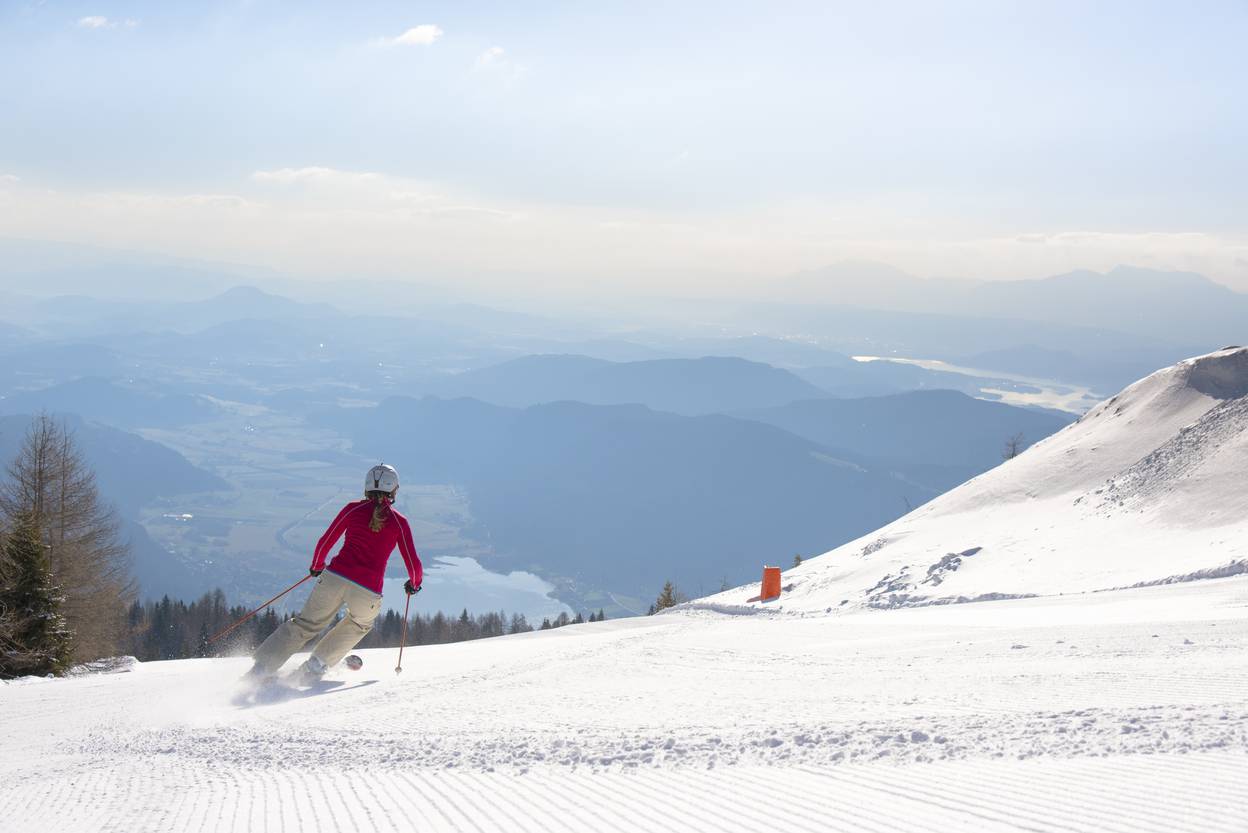 Skiing towards the sun – this is possible on the Gerlitzen Alpe in the heart of Carinthia, for example. In another ski area, on the Turracher Höhe, guests are served drinks by a Slope Butler service that celebrates its 21st anniversary this year. Those who really want to make the most of the sun on the slopes should not miss Early Morning Skiing. In Bad Kleinkirchheim you are even accompanied by Olympic champion Franz Klammer. Afterwards, participants can refuel over a delicious brunch with Alpe-Adria specialities.

Carinthia’s ski areas offer ideal conditions for a restful winter holiday on and off the slopes, far from mass tourism. The lift operators focus on safety – particularly when it comes to COVID-19 measures – comfort and snow reliability.

Comfortable modern lifts with heated seats, such as in Nassfeld or on the Gerlitzen Alpe, challenging downhill runs on the Turrach and Katschberg or Carinthia’s highest ski areas amidst three thousand meter summits on the Mölltaler Gletscher/Ankogel and the Grossglockner/ Heiligenblut, guarantee snowsure fun until well into spring. The smaller Carinthian ski areas in the Lavanttal Valley and Nockberge Mountains present themselves as family-friendly with open slopes.

‘One for all’ with the Top Ski-Pass in Carinthia!

It’s the key to 31 ski areas across Carinthia and East Tyrol. In addition, there are regional ski passes with many attractive perks, such as the "Ski and Wellness Weeks" in Bad Kleinkirchheim, "Ski for Free" in Weissbriach or Sportberg Goldeck’s winter package that is popular amongst families. 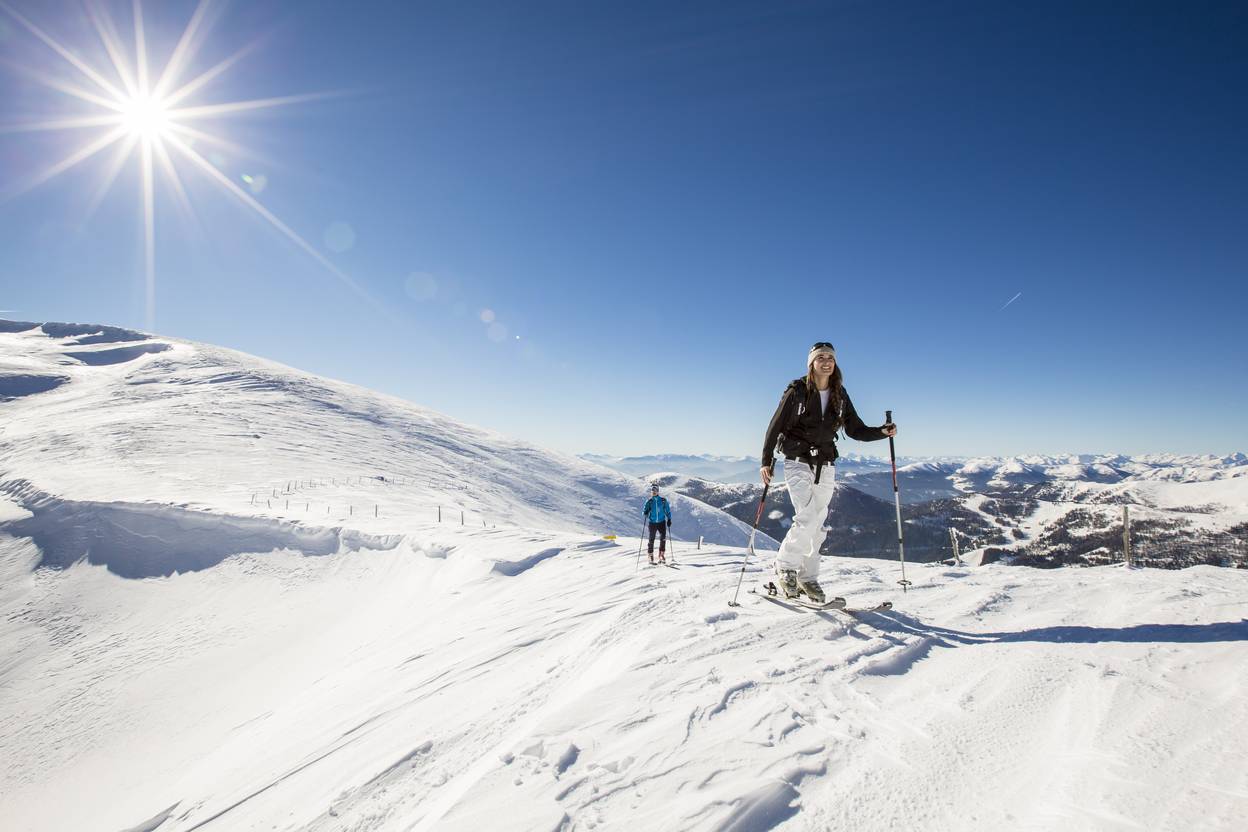 The Nockberge-Trail, Austria’s first ski touring trail that can be booked online, connects the five ski areas of Katschberg, Innerkrems, Turrach, Falkert and Bad Kleinkirchheim/St. Oswald. It’s an ideal choice for casual ski tourers who have sound knowledge of the sport and are in good physical condition, but aren’t interested in exploring high alpine passages. Allow up to six hours for each of the five stages, with a number of lifts and cableways giving the option of saving yourself a few metres in altitude along the way. Following the motto of "start when, where, with whom and how you want", ski tourers can make use of select establishments, a handy luggage and shuttle service as well as a trail hotline along the Nockberge Trail. Another special feature of the Nockberge Trail: instead of sleeping on mattresses in dormitories, as you would on other multi-day ski tours, you can stay in premium (wellness) hotels that serve first-class Alpe-Adria cuisine. By the way: the Nockberge Trail becomes a hiking route in the snow-free months.
nockberge-trail.com 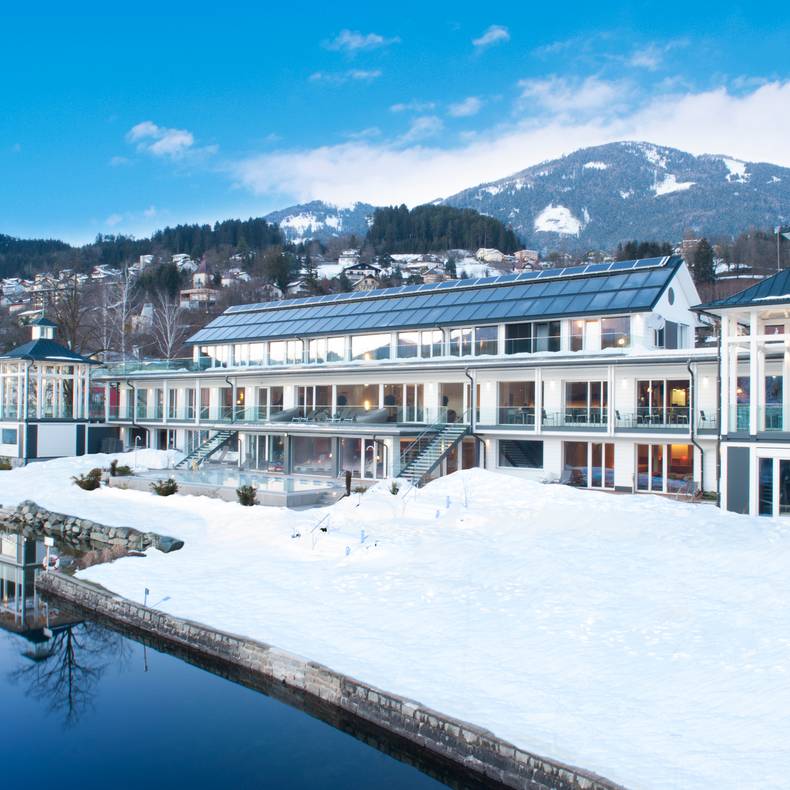 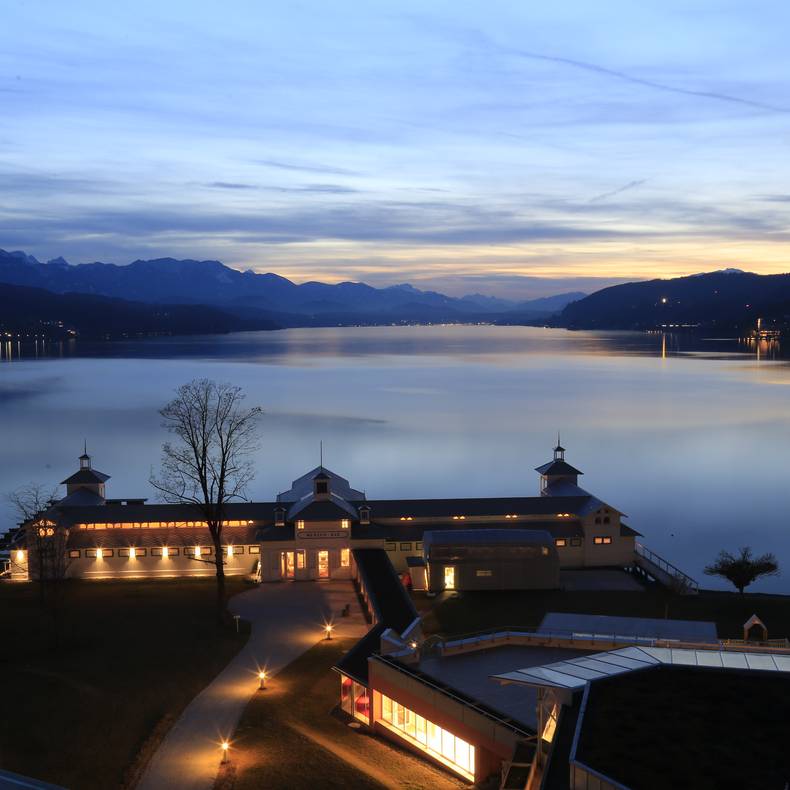 Winter wellness perfectly complements sun and winter sports in Carinthia. The warming winter sun is particularly intense from behind the window panes of the lake saunas and bathhouses on Lake Millstatt and Lake Wörthersee. It can be enjoyed outdoors in swimwear at the Kärnten Therme in Warmbad Villach and Bad Kleinkirchheim’s St. Kathrein and Römerbad thermal spas. Also not to be missed are the heated hotel-owned lakeside pools at Lake Millstatt, Lake Wörthersee and Lake Turrach.

Sunshine skiing from the middle of March 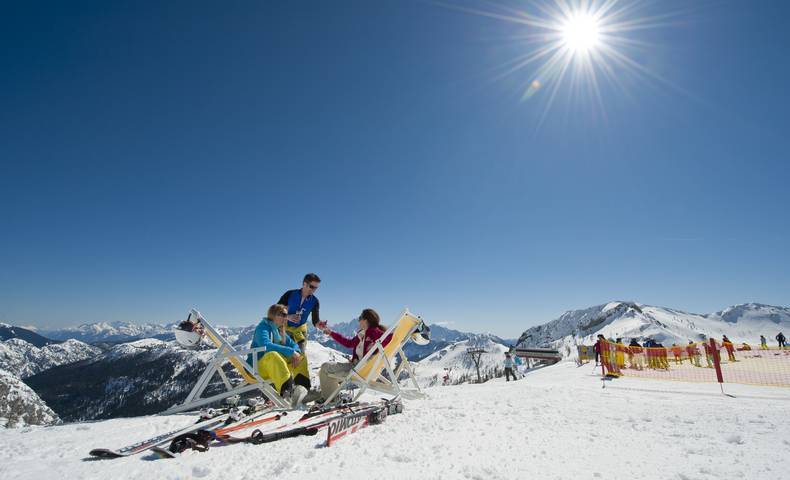 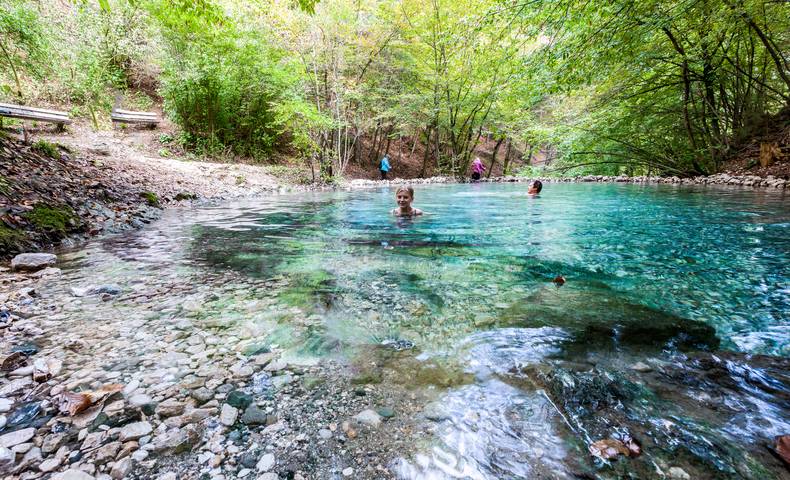 The highlight of the southern winter sun has to be sunshine skiing from mid-March until the end of the winter season. This is particularly celebrated in the Nassfeld ski area, which transforms into the largest sun terrace of the Alps. There are various themes at the huts, from palm trees and southern flair to fruity drinks and water slide pools. Inviting deckchairs await guests at the huts in the other Carinthian ski areas too, where food and drinks are primarily enjoyed outdoors. And it is quite something to look down from the snow-covered slopes at the soft green valleys where cyclists and golfers are already doing their first rounds.

One extraordinary natural phenomenon is a true herald of spring in Warmbad Villach. Near the Kärnten Therme, at the foot of the Dobratsch, the so-called Maibachl begins to bubble as the snow melts. Two pools have formed near the main spring where you can bathe outdoors in the warm thermal water that reaches up to 28°C. The water has a healing effect on heart and circulatory diseases and osteoporosis.

From exploring the snow-covered mountains to a relaxing snowshoe hike through Carinthia’s stunning nature, the Kärnten Card is the ideal winter companion. Impressive views from the top of the Pyramidenkogel, a spot of culture at the Carinthian museums, various mountain lifts and more complete the winter experience. Enjoy the perks of the Winter Kärnten Card from just € 33. Further information: www.kaerntencard.at